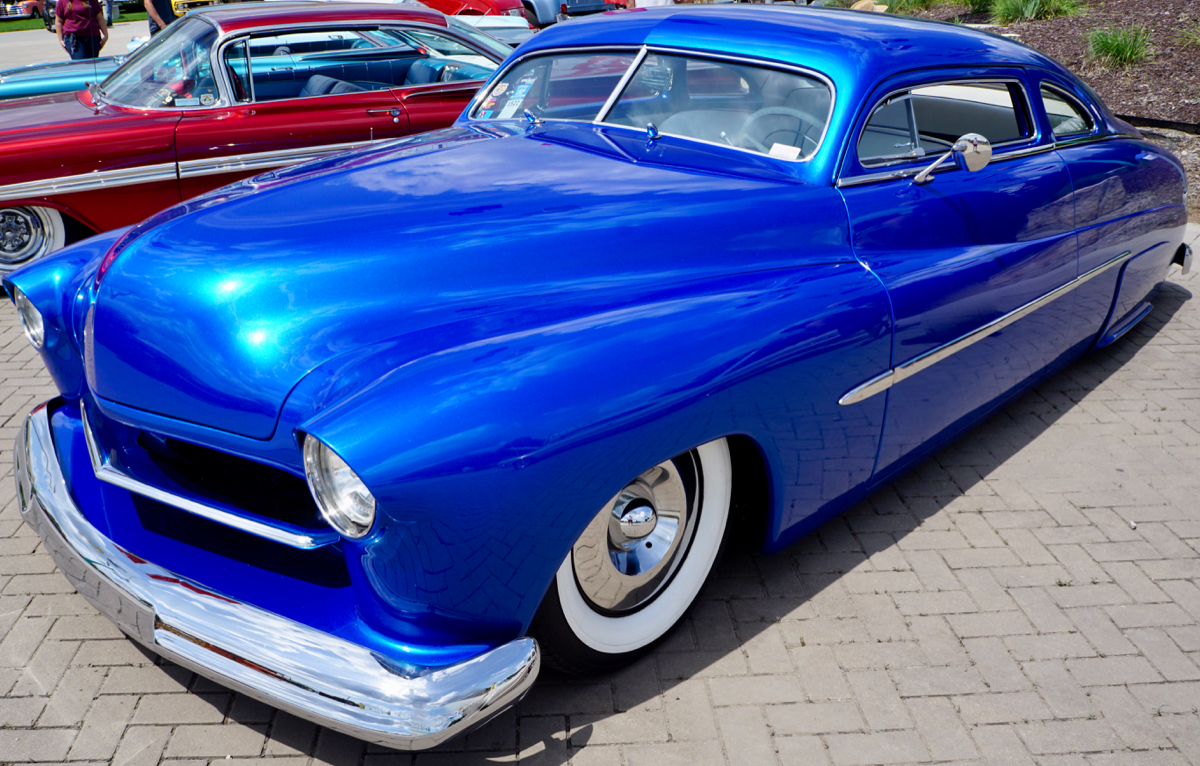 This is it, the Mercury that nearly 1 million of you have viewed. It has had our Facebook page humming since we posted it. As luck would have it, I ran into this Merc again at the Goodguys show in Iowa. I was finally able to track down the owner and get the skinny on the crazy popular car.

The Mercury belongs to Les Severin and it seems that Mercs have been in his blood since before he was born. His Grandfather purchased one new in 1950. Les’s Dad became the steward of the 4 door Everglade Green beauty as a Junior in high school. His Dad drove the wheels off of it and it is still part of the family. That Mercury has carried off 3 generations of married couples in the Severin family and is currently undergoing a restoration. So it seems he comes by his Mercury affliction naturally.

Believe it or not this blue beauty was a junkyard find. Les bought his 1950 Mercury in 1982. It had no engine or trans and major body damage. Les even had to bring his own wheels and tires along to get it home. Once home, he started wrenching on it in his driveway. He was then able to move it to his in-laws garage until he got a garage of his own where he finished it. Well, kind of finished. Les drove it for 20 years in primer with no interior to speak of. His kids grew up in the back seat watching the road go by through the holes in the floor. After many many miles it was time for the restoration which began in 2013. It was finished and on the road in 2016. Since then he has logged over 8,000 miles in it.

Les did the majority of the mechanical work on the Merc himself. However, Les says he could never have finished the car without the help of his sons Lance and Kyle. Each playing a major role in the completion of the project, including installing all of the wiring and assembling the entire car. An incredibly grateful father for like minded sons with mad skills.

He modeled his Mercury off of Louie Bettancourt’s and Sam Barris’s 49 Mercs. His Mercury has a 4 and 1/2 inch chop in the front and a 5 and 1/2 inch chop in the rear. The Merc sports a full fadeaway, additionally the B pillar is canted forward. The wide whites, frenched headlights and antenna wrap up the package. The question though that had ya’all going to the mats was “What is that color?”  The painting was done at John’s Body Shop in Nicollet, MN. He started with House of Kolor Candy Oriental Blue and went to town from there. There you have it friends, try your hand with Candy Oriental Blue. 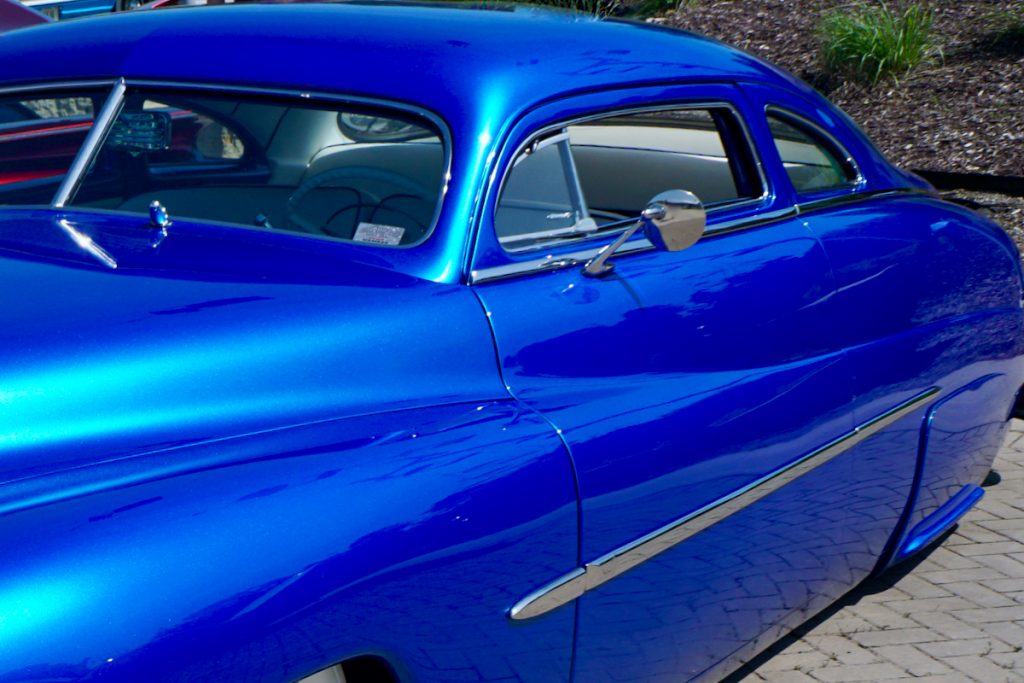 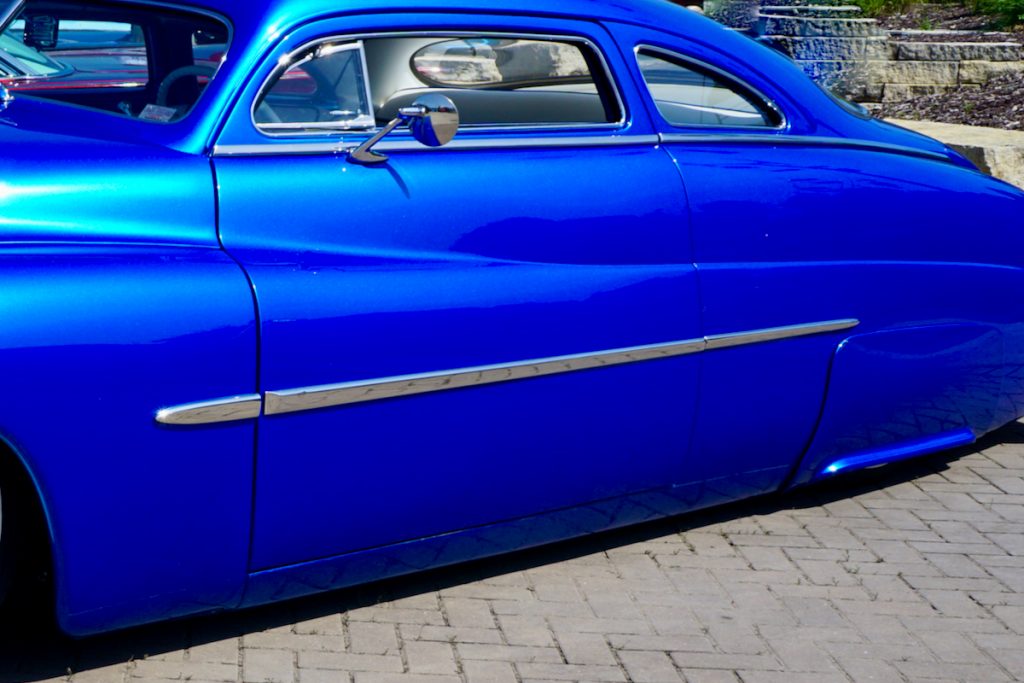 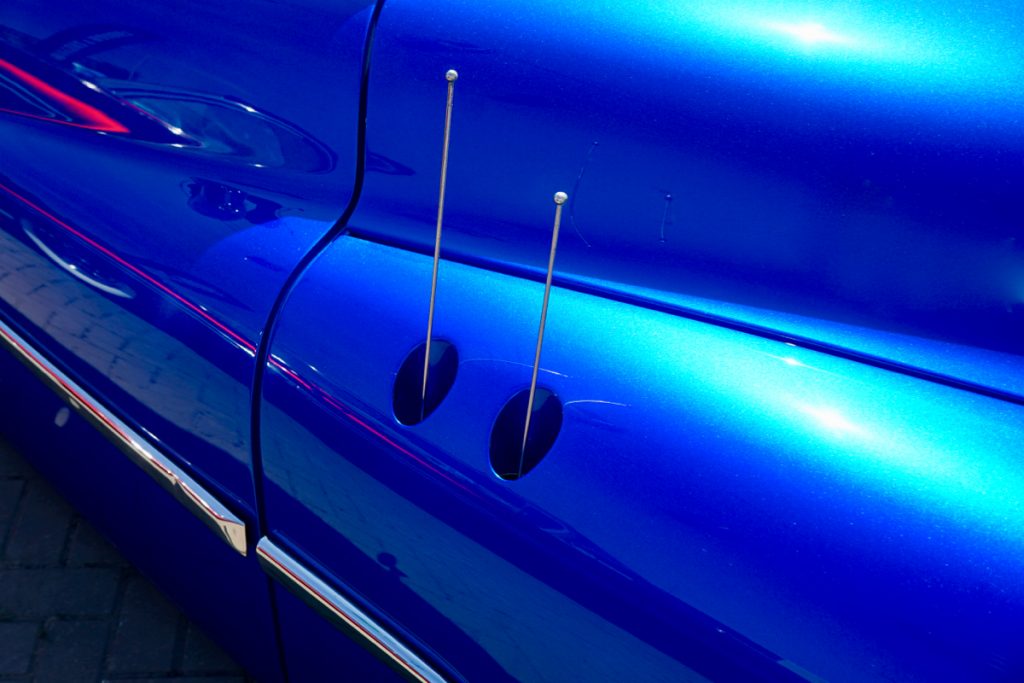 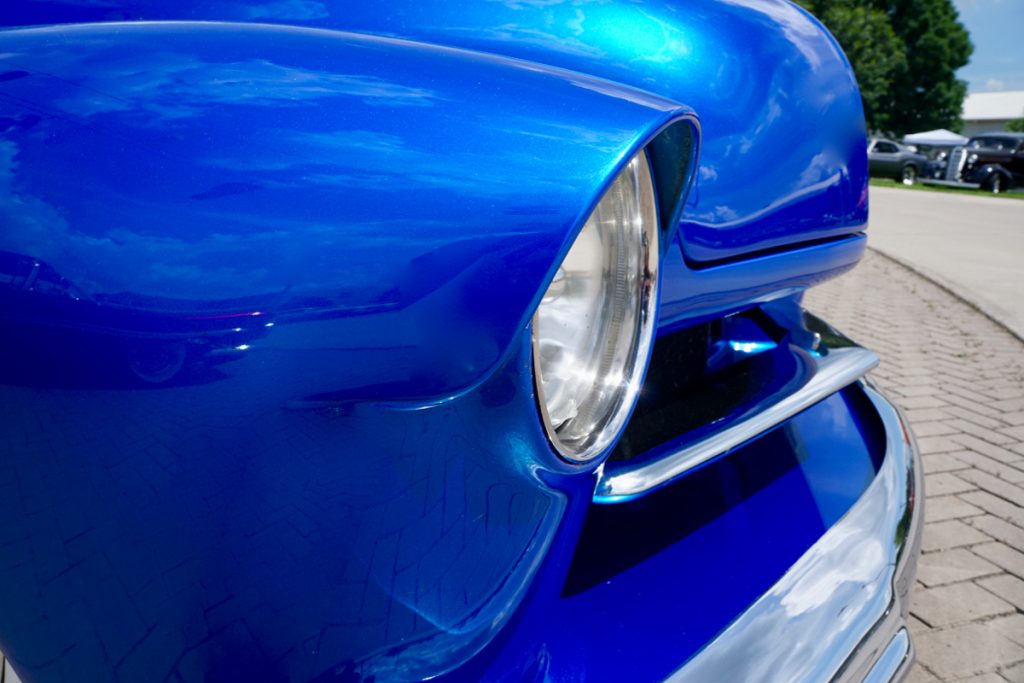 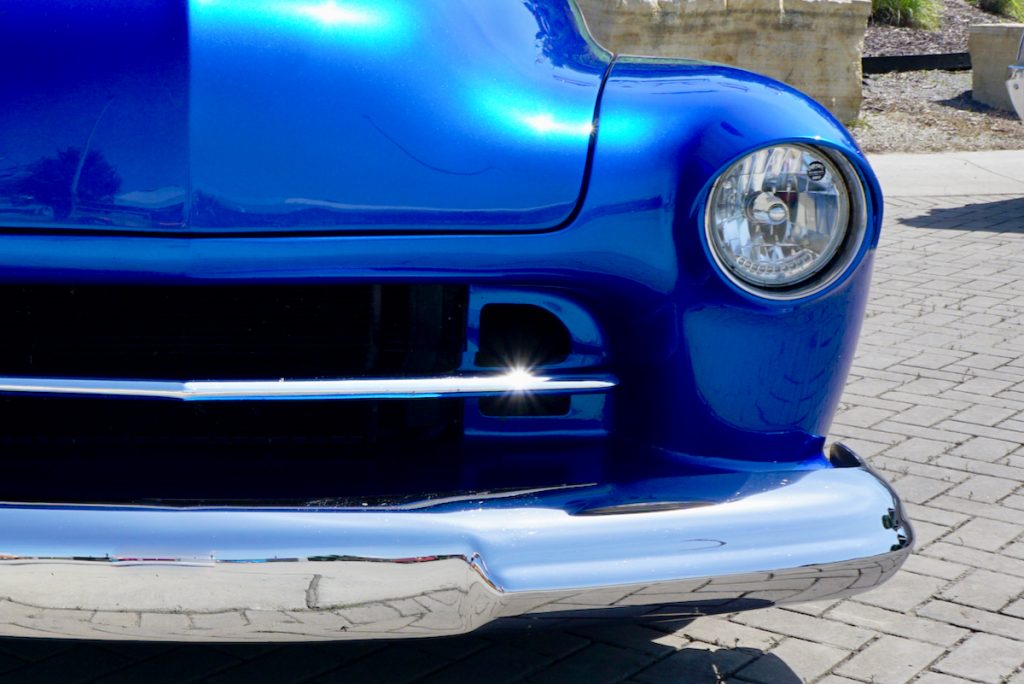 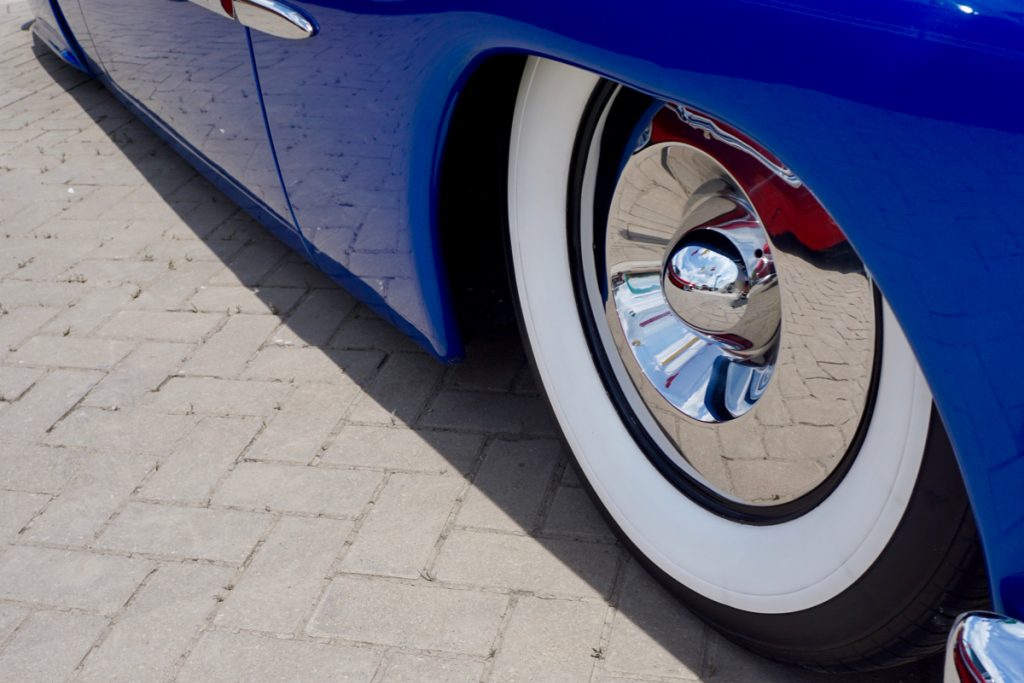 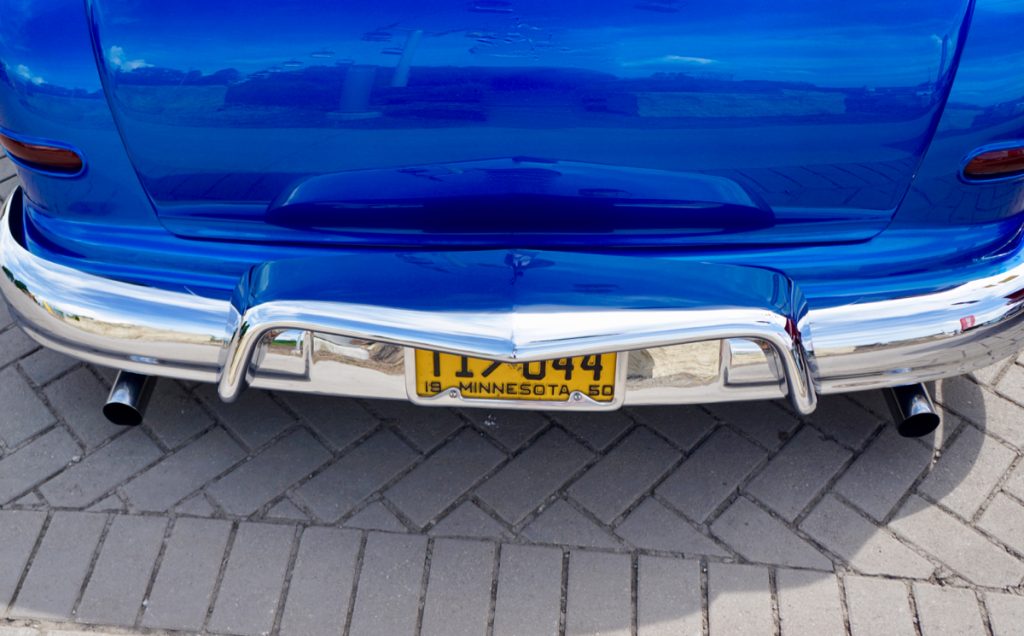 Les poured through his collection of early 50’s Hot Rodding Mags and he knew he had to have a white tuck and roll interior. 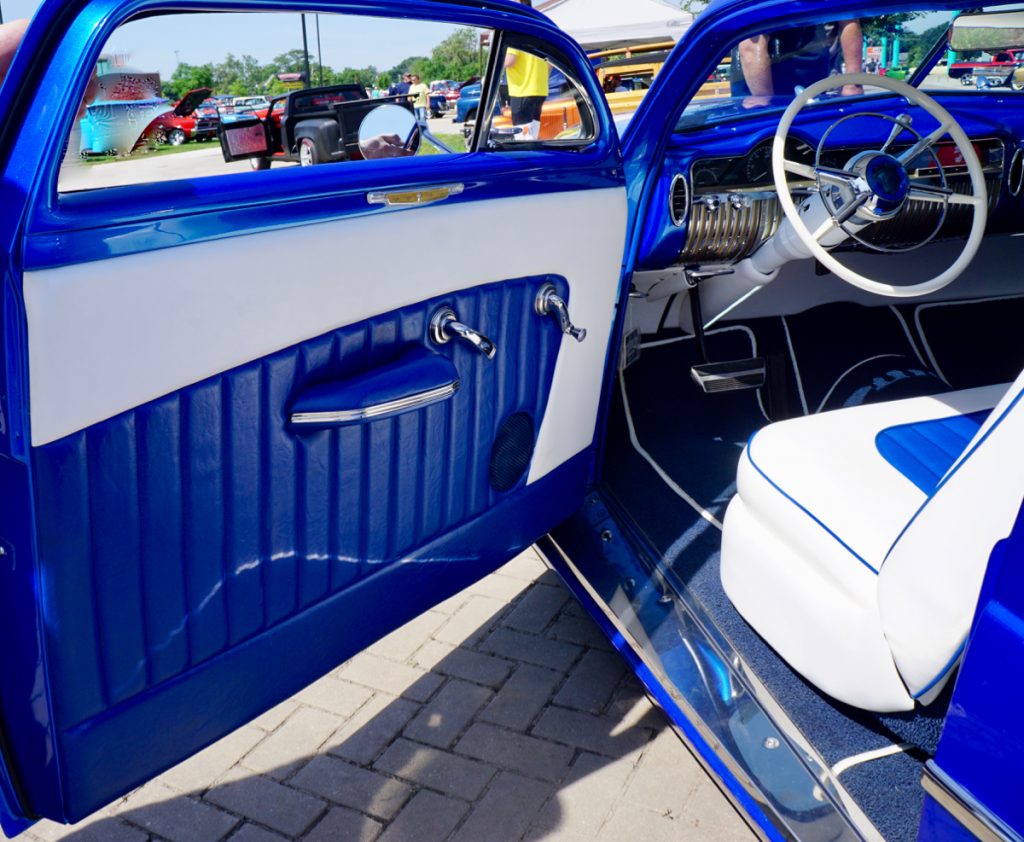 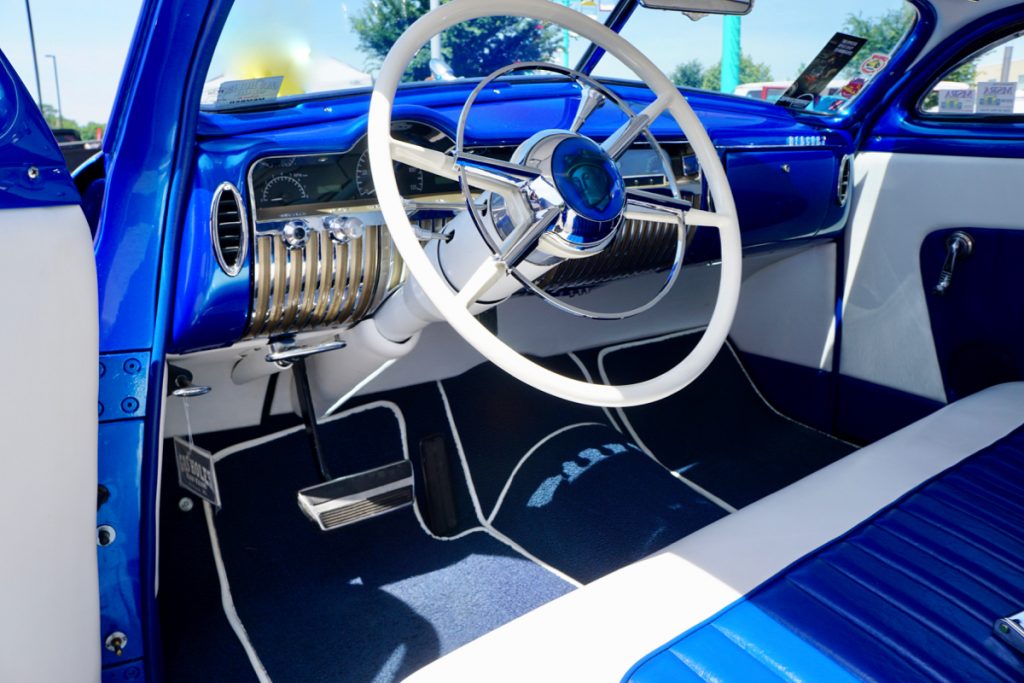 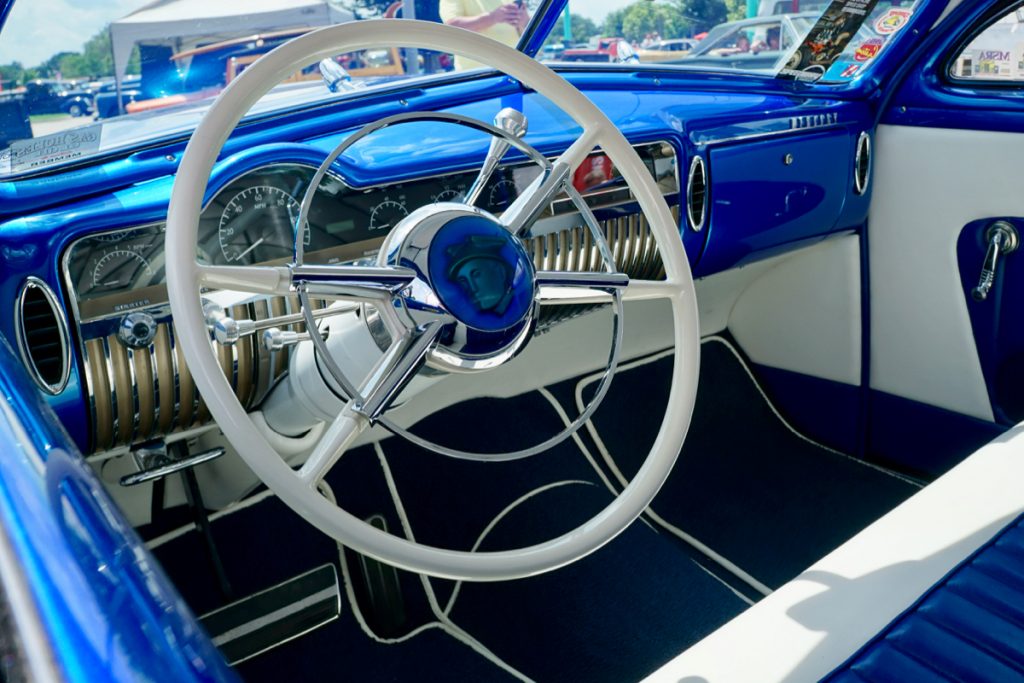 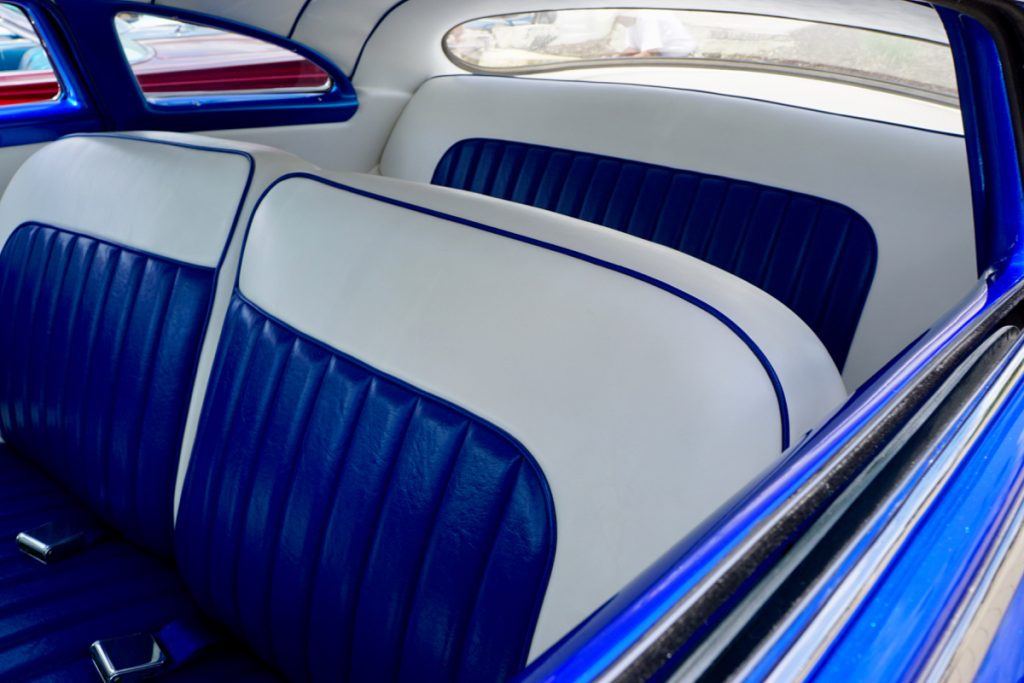 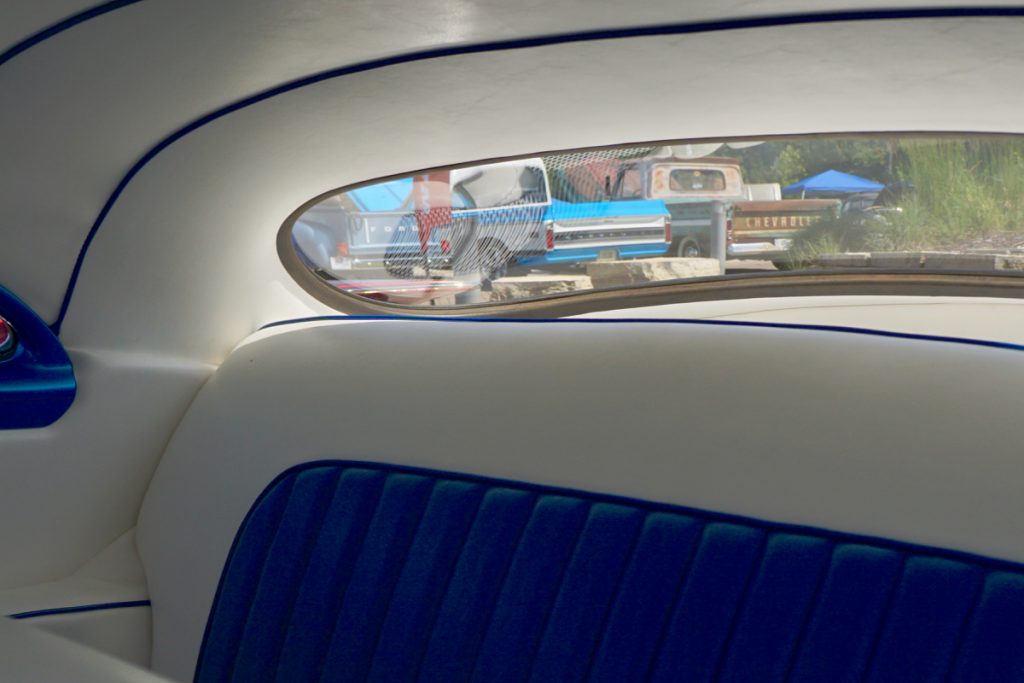 Built for driving, the Merc rides on an Accuair E level system and the Vintage Air Conditioning keeps Les and his passengers as cool on the inside as his ride is on the outside. It’s got an Olds 455  power plant with a 700R4 trans. It turns 2 grand at 75 mph while cruising. All that comfort with stunning looks to boot. 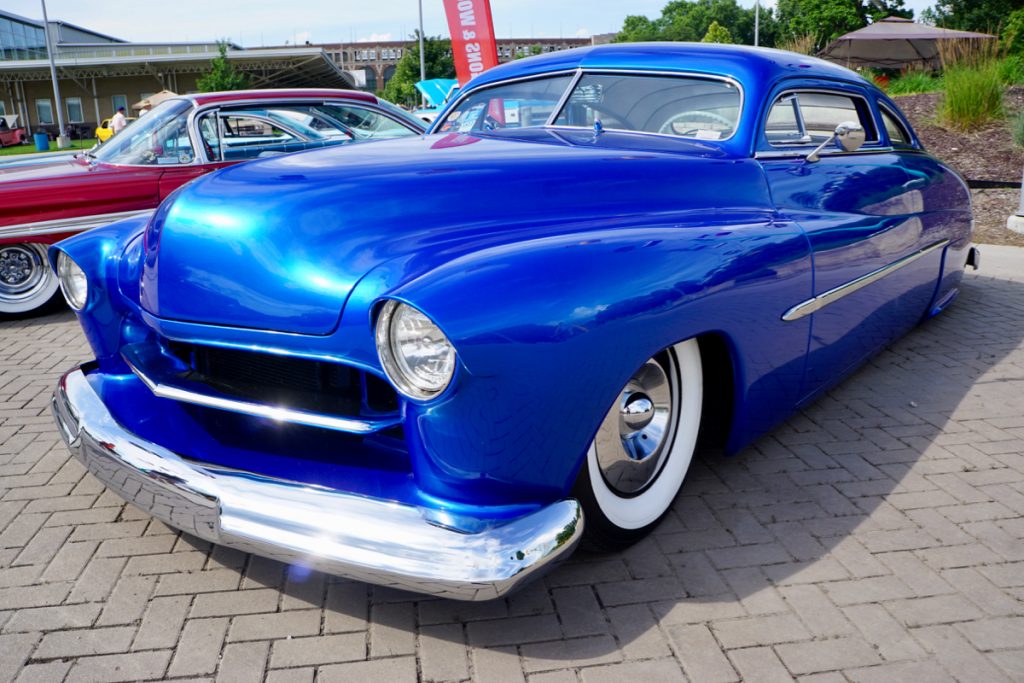 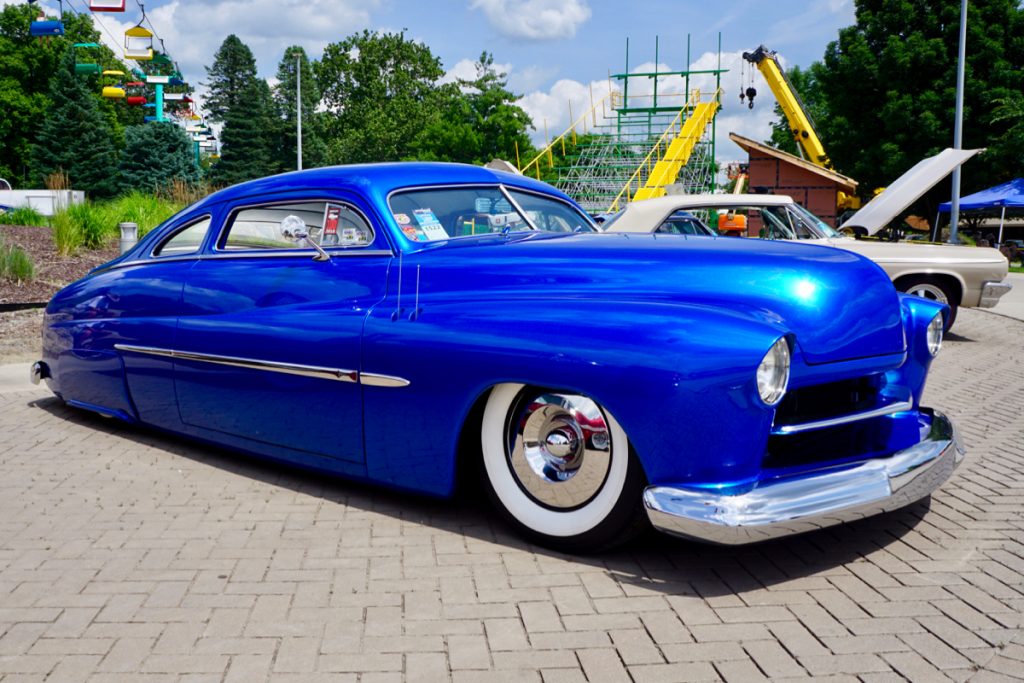 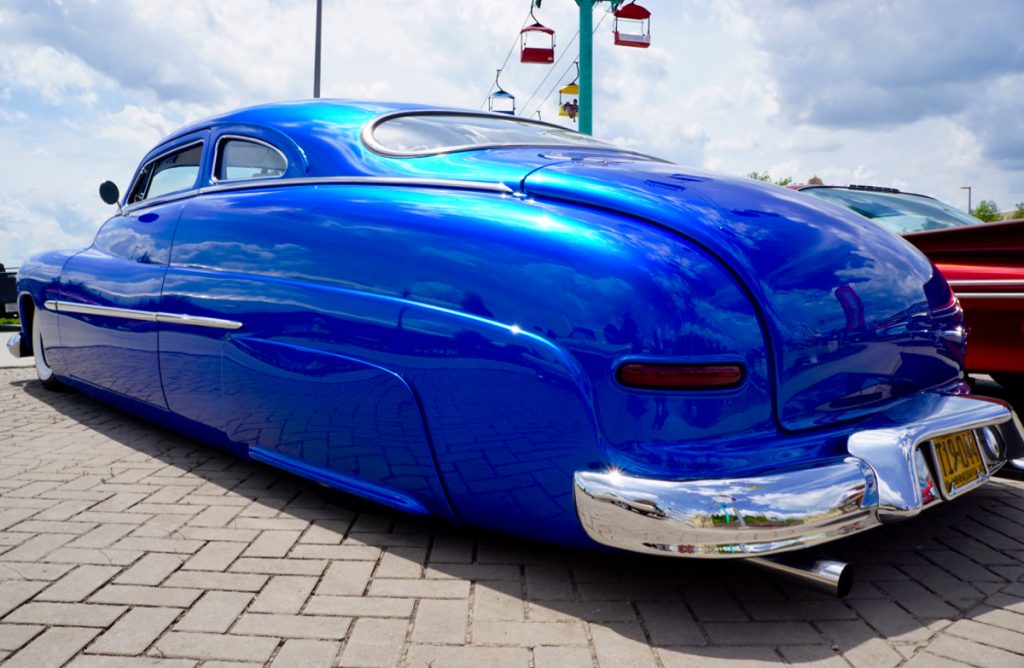 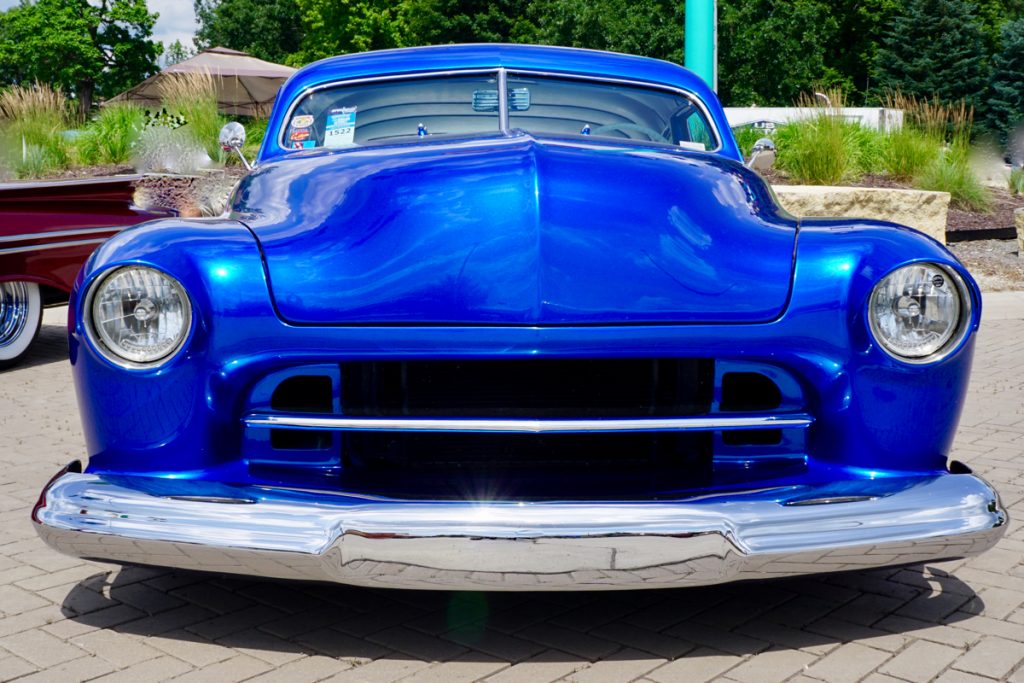 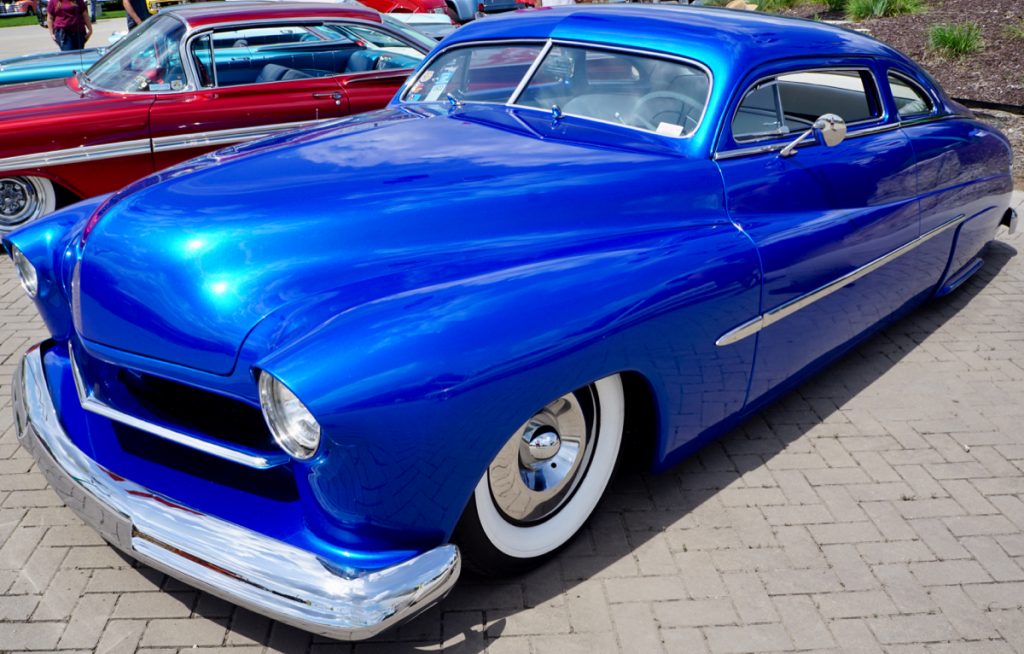 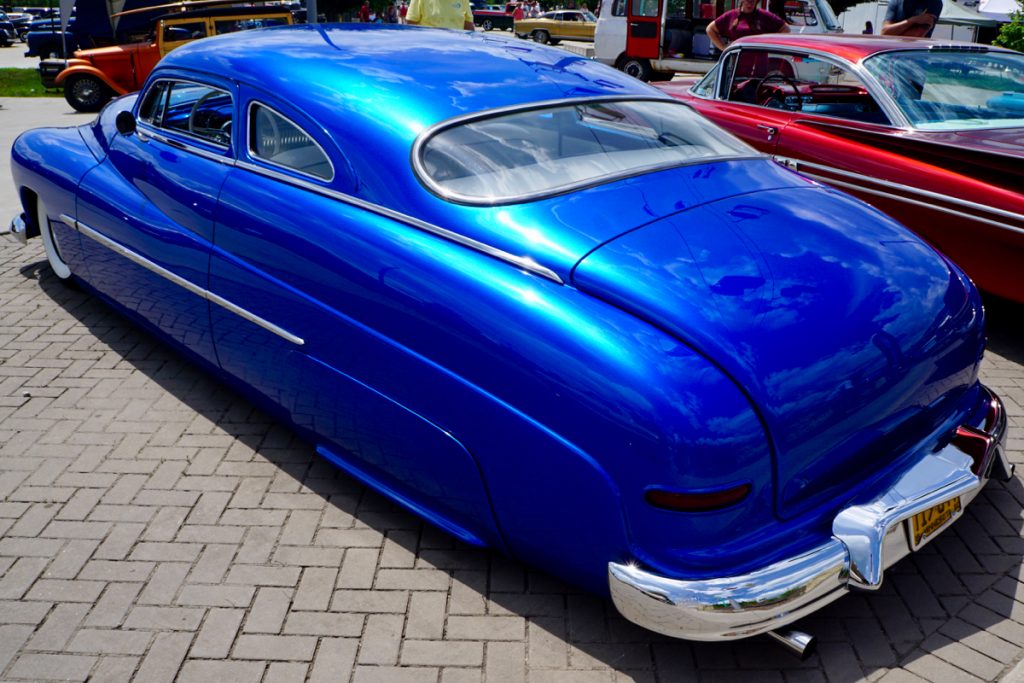 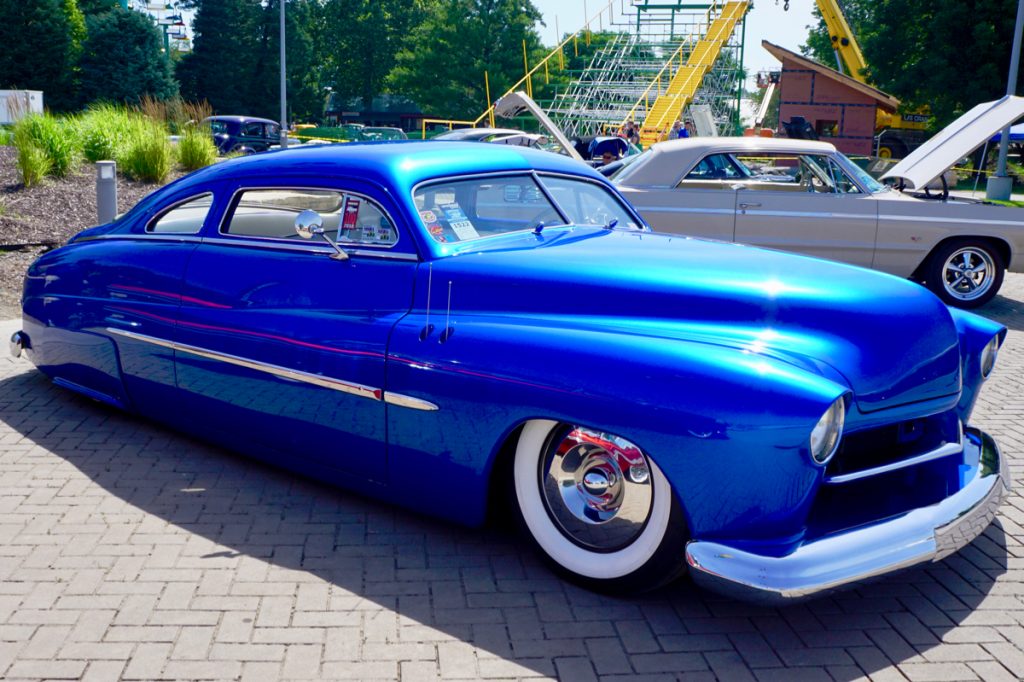 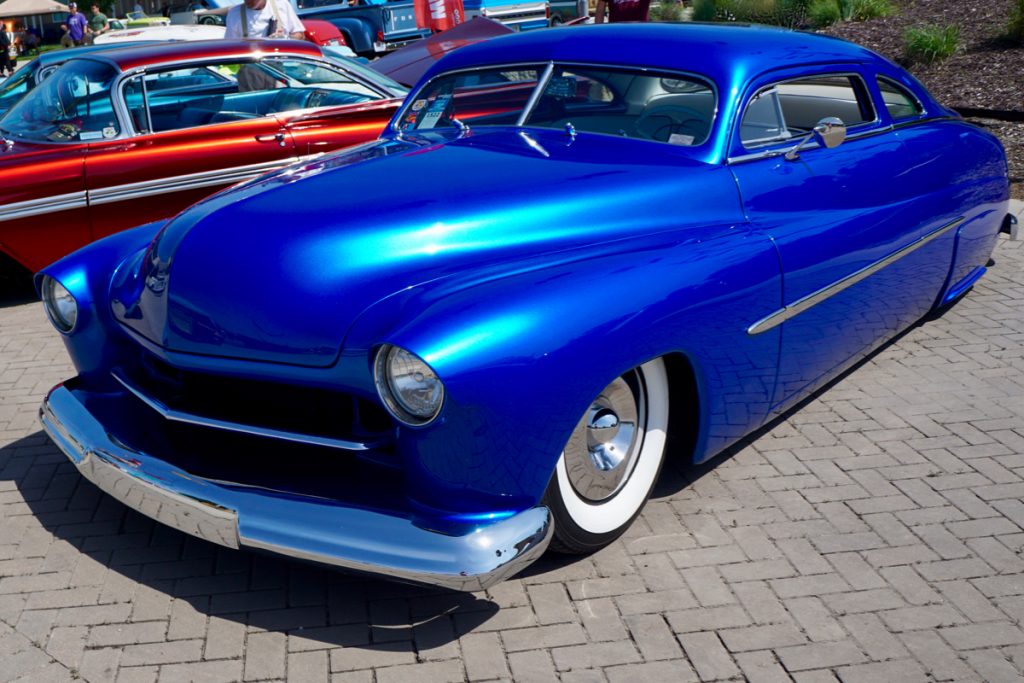 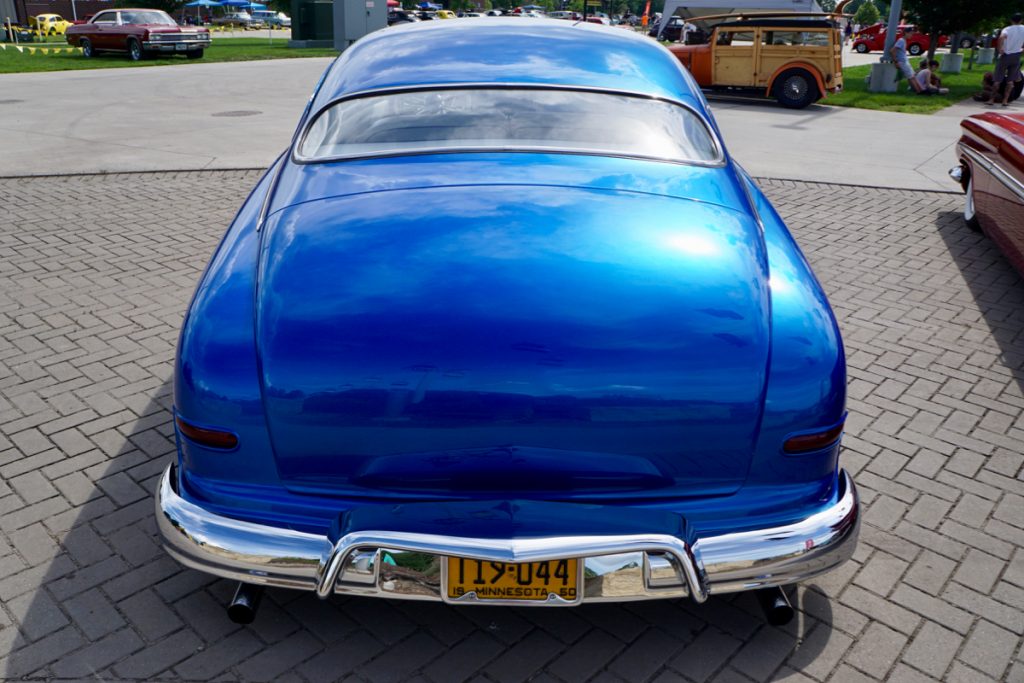 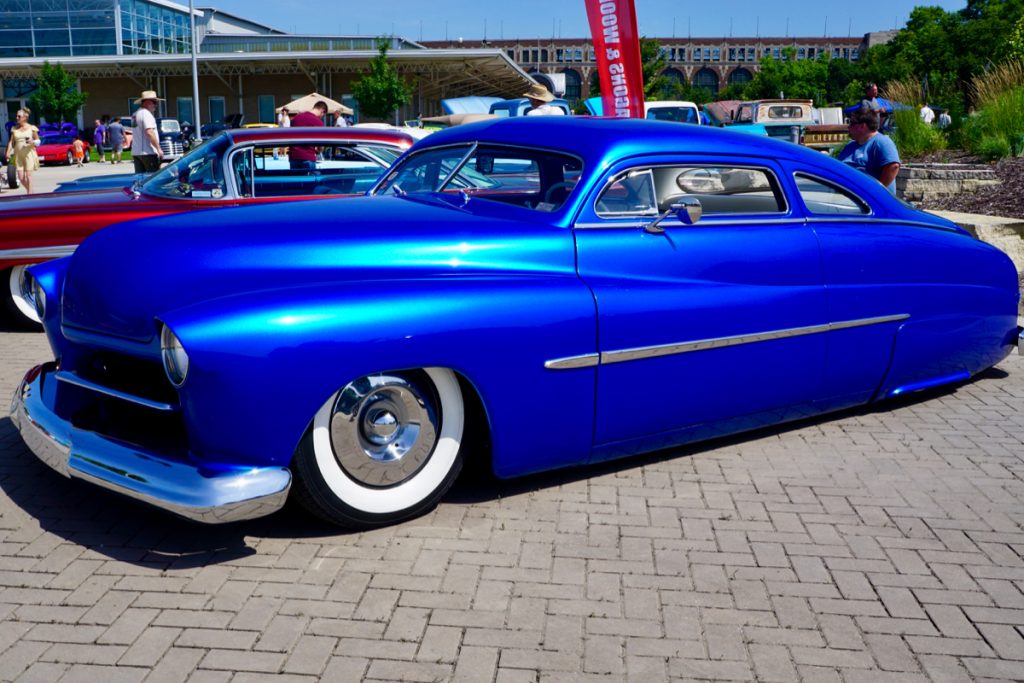 We aren’t the only ones that are nuts for this ride. Meguiar’s recognized them with an award at Goodguys, it was then nominated for Custom of the Year by the MSRA, in addition it was one of the Street Rodder Top 100 cars. Cast an eye at an updated walk around of this blue beauty.

FYI, you too can shine bright with classic sequential led taillights similar to the custom set in this Mercury. You can find them at EasyPerformance.com, classic look with modern technology. It sure helped Les that is friend is in the biz and could outfit his Custom with Custom lights!

Get yourself over to the Pony Girl Show Stopper Gallery it’s the gift that keeps on giving the whole year through.

Want a little something extra and who doesn’t this time of the year? Best of all, it’s the right size and color; it’s our Social Media Pages. Follow us on FaceBook and Instagram, these pages are the perfect fit.